Nestled In Stonewool: Starting Off on the Right Root 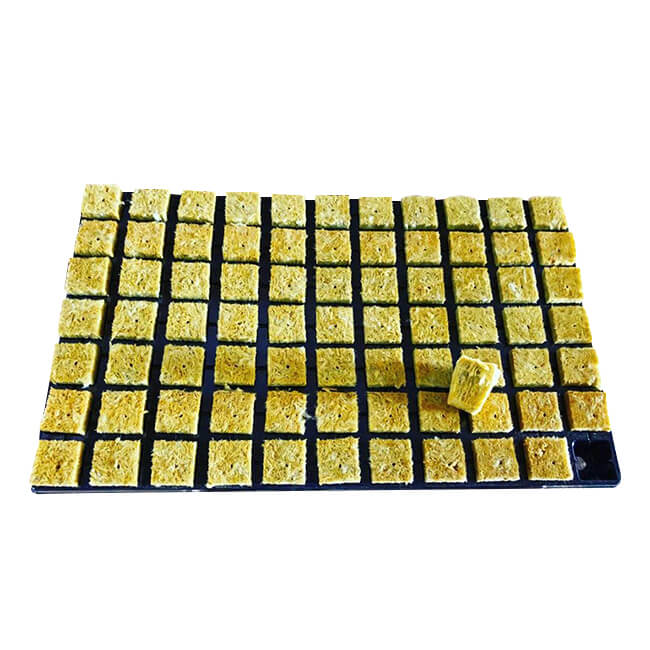 At the start of the growing season, it can be a very crazy and fast paced time. Plants must be started through seeds, cuttings, or clones all while still maintaining other aspects of the commercial greenhouse business. To reduce the amount of stress in the early stages of the growth process, selecting the right growing media will help all through the process of growing crops. There are many media and methods to starting seeds from the traditional potting soil to the newer stonewool and even stone. However, with the delicate nature of plants and seedlings an operator needs to make the choices that are best for the specific crop and overall goals of the operation.

Soil vs. Stonewool: Which One is Best?

Before determining the needed approach for using stonewool, an operator needs to weigh the benefits of both soil and stonewool separately. Soil has been the traditional media for growing crops and plants. Soil is an easy to use media that is also affordable and can be quite easy to come by. Soil can also be used to buffer excessive nutrients and fertilizer. It can also be adjusted in content, type, and drainage. Although this is a tried and true method, there are some drawbacks especially in the modern world of commercial farming. Soil can be hard to regulate in moisture, aeration, as well as having a higher risk of pathogens and pests. Stonewool has benefits that have made it the go to media for growing crops on a commercial scale. Stonewool is able to retain air and water at adequate levels, can be reused through several crop cycles, is naturally sterile, can be monitored and controlled easily, and is ideal for hydroponic growing systems. When handling stonewool it is essential to wear proper PPE to reduce the risk of eye, lung, and skin irritation from dust and fibers during processing and prep. In addition to these benefits, the major benefit of stonewool over soil is that ability to grow in less space without compromising on water and nutrient availability for the crops.

Most modern day operations have made a switch to stonewool, as it is a reliable and relatively easily accessible media that has many benefits that make the venture worth the while. Stonewool originally has its origins in the construction industry due to its excellent insulation ability. In the 1970’s research was conducted on its ability to be a growing medium. It was found that it was suitable for growing plants and through the years, stonewool was engineered and designed to better aid plants during their growing season. Now stonewool is one of the most popular growing media in the hydroponics sector. This media is composed of basalt rock and chalk that once heated and spun can be shaped into various cubes, blocks, and more.

Preparation of the Stonewool Before Starting Seeds and Cuttings

Stonewool, just like any other growing medium should be prepared properly before starting seeds or cuttings. Mistakes no matter how minor at the start of the growing season can cause a domino effect that causes problems down the road in the season. Due to the nature of the materials used to make stonewool, the pH needs to be balanced, and the material soaked to ensure moisture and a neutral growing area. When starting out the stonewool cubes typically have a pH around 7.8. This pH range is a bit too high for plants as the average plant prefers a pH of 5.5-6.5. In order to balance the pH for growing, an easy approach is soaking the material in water for around twenty four hours. Testing the water pH will ensure that this method is effective. Once the stonewool is soaked for a day, seeds can be planted. When planting seeds and cuttings, it is important to have a clean and sterile environment as well. While stonewool is naturally sterile and free from pathogens, all equipment used should be cleaned and sanitized for each planting or crop type. This will ensure the health of the plants throughout the growing season.

Seed starting should be done in starter plugs or starter cubes. These have the right depth and size for proper seed germination. They also house the perfect amount of oxygen and water for the starting seed. A hack for planting seeds in grow plugs and cubes is to wet a toothpick and pick up the seed with the wet end. The grower should then be placed in the bottom of the cube through the hole pressing to one side. If there is more than one seed, they should be placed on opposite sides of each other. After seeding the cubes, they should be placed in a tray with the environment kept at a high humidity. Most growers will cover the trays with humidity domes.

Stonewool can also be used to start cuttings or clones of plants as well. When dealing with cuttings, the process is similar, with a few minor differences. When taking cuttings, care should be given to the mother plant before harvesting cuttings. Twelve hours or so before the cuttings are to be harvested, all mother or donor plants should be watered thoroughly. After the twelve hours, cuttings can be taken, placed in rooting hormone, and then placed in the stonewool cubes. They should then be watered using hydroponic nutrient solutions to feed and stimulate the cuttings to grow rapidly and healthily.

Overall, stonewool is the go to choice for all stages of the plant growth cycle for the commercial hydroponic community. The sterile, pathogen free material is excellent for supporting plants through all stages of life with easy transplanting and care. For more information and help with suggestions for starting seeds in stonewool and other related questions, reach out to our experts at RedRock Block. The RedRock Block team of experts are backed by decades of combined experience in the field.